An alternative way to express ZERO 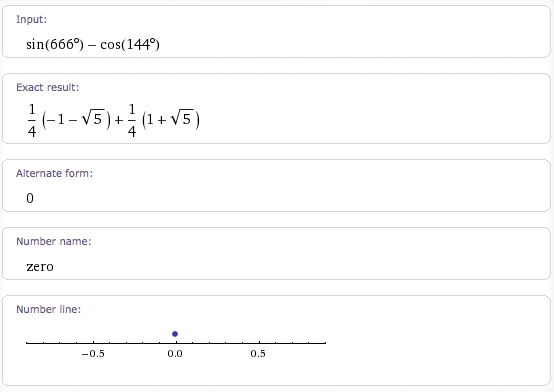 666 and 144 are two special numbers and both are mentioned in the Bible. One in Revelation Chapter 13 in the last verse and the other in Chapter 14 in the first verse.

Interesting, John says:”Let the one who has intelligence calculate the number of the beast” … and some people assume behind this number just a symbolic meaning. The next number is the 144.000 and John reveals how it is calculated.

Are this numbers related to each other?

They are opposed in the context of cycles.

The sine and cosine functions are related in multiple ways. The derivative of sin(x) is cos(x). Also they are out of phase by 90°: sin(π / 2 − x) = cos(x). And for a given angle, cos and sin give the respective x, y coordinates on a unit circle.

And the number 666 is imperfect in a very special way:

A cycle in nature for example is one round of the planet earth around the sun. It is completed in 365 days. Before the global flood at the days of Noah one year consisted of 360 days. The year was approximately 5 days shorter.

72000 is a number representing the pathways of consciousness in one (perfect) human being. The Bible states that angels are not given in marriage (Matthew 22:30), therefore we can assume that a angelic being has 144000 energetic pathways and they are complete in themselves, with no need for a mate.

Before the flood angels of God committed a crime against nature by having sexual relation with human womans (Genesis 6:1-4). God did not create angels with a desire for sexual relations with humans. Yet Satan evidently was able to get some of them to think improperly about such matters. Thus within certain angels a desire was cultivated for something that God purposed only humans should enjoy within the proper bounds of marriage. These angelic “sons of the true God” did a wicked thing, leaving their positions in heaven to come to earth to marry women. (Genesis 6:2) Such action was motivated by a wrongly cultivated desire, not a natural desire put in them by God. This was also the reason why God destroyed an ancient world.

After the flood Nimrod, a rebellious and coward man, established the very first human government and together with his wife Semiramis (or Ishtar) and his son Tammuz they formed the first False Religion. The doctrine of the Catholic Church of “Trinity” has it’s root from this three deceivers (representing the illegitimate relationship between humans and angels/demons).

Now the circle is complete: Genesis revealed the “Beginning of human governments and the false religion” and Revelation reveals it’s end. The Rise and Fall of an imperfect Empire … and soon the beginning of the eternal perfect Kingdom on earth.